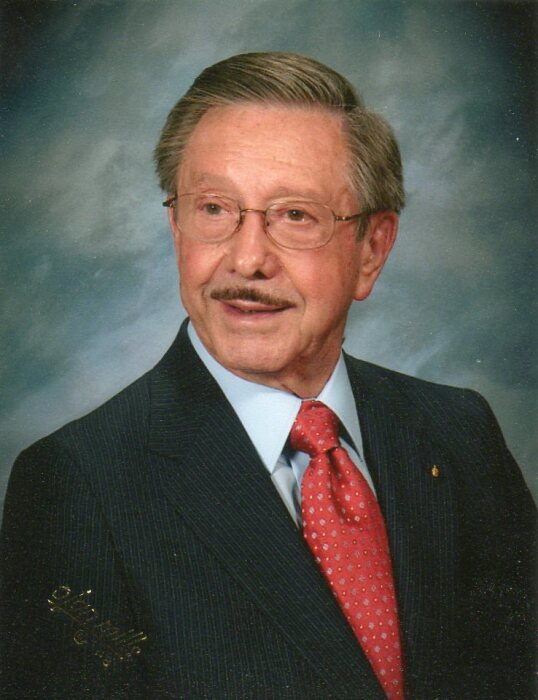 Services for Cecil Reid will be live streamed/recorded and available to at https://www.oneroomstreaming.com/view/authorise.php?k=160342177882456

Cecil W. Reid, age 96, of Kansas City, Missouri, died October 17, 2020 in Arizona surrounded by his family. Visitation will take place at Terrace Park Funeral Home and Cemetery on Thursday, October 29, from 1:00 to 2:00 p.m. with a Celebration of Life and Graveside Service immediately following. In lieu of flowers, contributions may be made to the Northland Assistance Center or Della Lamb Community Services.

Cecil was born August 11, 1924 on a farm near Longwood, MO to Terrellia Ann and Robert W. Reid. He grew up in Sweet Springs and graduated high school in 1942.  Drafted while attending the University of Missouri, he served three years during WW II with the 397th Armored Field Artillery Battalion of the 16th Armored Division, participating in the liberation of Czechoslovakia as a unit of General Patton’s Third Army.  Following an honorable discharge, Cecil returned to the University of Missouri, where in 1949, he received a Bachelor of Science degree in Business Administration.

In June 1950, Cecil married Dorothy R. Lombardo of Kansas City shortly after they met as members of the Criterion Class of Linwood Methodist Church.

Cecil was employed in 1956 by Panhandle Eastern Corporation and subsequently retired as Risk Manager in 1985 after almost 30 years of service. Cecil served as president of the Greater K C Society of Risk & Insurance Management and was the permanent secretary of the Pipeline Insurance Managers Conference.

Cecil played piccolo in several school bands and orchestras and was a fan of jazz, big band era music, and dancing.  Late in life, he learned to play the organ and was a charter member of the Northland Organ Club, competing in several local contests.  He was a racing and sports car enthusiast, and enjoyed attending SCCA road races, both as spectator and pit crew.  He also liked sports car rallies (when his navigator, Dorothy, was able to keep him on course) and considered himself a “car nut”.  He was seldom happier than when piloting his blue 1963 Austin Healey 3000 convertible or one of several BMW’s he owned.  He also enjoyed grilling, often smoking his famous chicken and brisket for the entire neighborhood on his Hasty Bake.

But above all, Cecil loved his family—those related by blood, marriage or adoption, plus long-time friends he considered honorary family.  He was the family historian, documenting our lives through numerous movies and photographs dating back to the 1950s that he so enjoyed creating. Cecil was preceded in death in 2007 by his beloved wife Dorothy of 57 years, by his only sister, Mary Frances Storey in 1987, by his nephew, Neal Kennedy in 2013, and by his sister-in-law, Marie Webster in 2006.  Cecil is survived by his daughter, Celia Ann, and husband Antonio Trujillo of Chandler, AZ; granddaughter Leanne R. Trujillo; grandson Anthony W. Trujillo (Karen), step-grandsons Jason Trujillo and Eric Trujillo, niece Margaret Padgitt (Eugene), niece Alice Brink, nephew Frank Kithcart (Aileen), plus many other beloved family members.

To order memorial trees or send flowers to the family in memory of Cecil Reid, please visit our flower store.