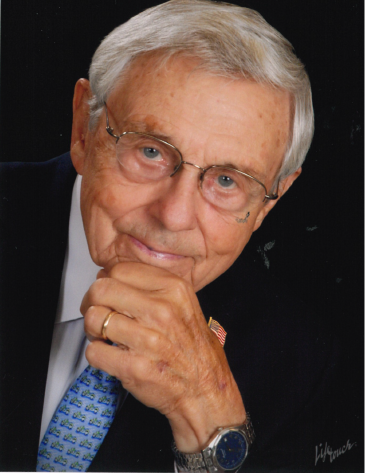 Don was born January 16, 1927, at home on the family farm near Helena, Missouri to Jesse Edward and Eda Josephine Kuenzi.  His primary and secondary education took place in Helena.  On January 9, 1945 he joined the U.S. Navy, serving as radio operator as Radioman 3rd Class in the Pacific Theater until WW II ended.  He received an A.B. degree in zoology from the University of Missouri Columbia in 1949, where he was elected to the Phi Eta Sigma freshman honorary fraternity, and continued to a B.S. in Medicine in 1951 as a member of Phi Beta Pi medical fraternity.  In 1953 he completed his medical education with an M.D. from the University of Kansas. Returning to the Navy, Don completed his internship at Camp Pendleton Naval Hospital while on active duty, and served additional military time during the Korean War.  He  was honorably discharged in 1954 as Lt. J.G., U.S. Naval Reserve.  Don married Martha Anne Reid of Carrollton, MO on August 20, 1951.  Together they have five children and ten grandchildren.

Don began Family Practice of medicine in Kansas City, MO in the Northland, at the Gashland Clinic in late 1954, and assisted in developing the practice to an eight physician group by the time of his retirement in 1991.  In the early days of this medical practice there were no emergency rooms in the Northland area, necessitating many house calls.  Obstetrics was also a large and integral part of the practice until the mid 80's.

After retiring from clinical practice, Don became restive, and entered a new career at the V.A. Hospital in Kansas City conducting Compensation and Pension Exams.  This second medical experience stretched out to eight years, a gratifying ending to a life in medicine.

Don was president of the Clay County Medical Association in 1971, and served one term as president of the Metropolitan Medical Society after its formation.  Five years ago the University of Misouri Medical Alumni honored him with their Distinguished Service Award and the Metropolitan Medical Association with a lifetime service award. Outside of medicine he  served on the Board of Directors of Sentinel Federal Savings and Loan of Kansas City, serving as Chairman from 1992-1996.

Members of the Gashland Evangelical Presbyterian Church since 1954, the church and its activities have been a focal point of Don and Martha's lives.

The sea, lakes, and rivers have been a passion of Don's since boyhood.  Sea duty in the Navy was fulfillment, as was a 6 month journey that he and Martha undertook in 1991 after retiring.  They piloted a 38 foot trawler from Florida to the Mississippi, to Kansas City, Chicago, through the Great Lakes, to the St. Lawrence River, on to New Your City and down the Intracoastal Waterway back to Florida.

Dr. Kuenzi was passionate about his Savior, Jesus Christ, his family, the Gashland Church, and his profession.  He deeply loved his country and the remarkable opportunities it afforded him.

Visitation will be held at the Gashland Evangelical Presbyterian Church, 8029 N. Oak Trafficway, Kansas City, MO 64118 on Friday, March 19, 2021 from 6:00-8:00 p.m. and Celebration of Life on Saturday, March 20, 2021 at 10:00 a.m. at the church. In lieu of flowers, the family suggests memorial contributions to the Gashland Evangelical Presbyterian Church.

To order memorial trees or send flowers to the family in memory of Donald Kuenzi, M.D., please visit our flower store.