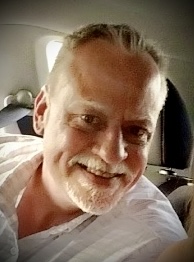 Edward was born on February 17, 1961 in Hannibal, Missouri to Jack and Joyce Walker. In 1980, Edward and his brother, Dan, moved to Kirksville, MO to attend Truman State University. After receiving his bachelor’s degree, he moved to the Kansas City area, where he began working for MODOT. Edward was very witty and had a great sense of humor, making friends everywhere he went. He adored his family and enjoyed spending time with them any chance he could. He was especially close with his father and the two of them would visit flea markets and antique shops, scouring for their latest treasures. Edward was often found soaking up the sun in his pool along with his golden retrievers, neighbors and friends.

A private memorial service will be held at Terrace Park – Lakeside Chapel on Wednesday, April 13th at 3:30pm. A Celebration of Life for friends and family will be held at a later date.

In lieu of flowers, contributions may be made to The University of Kansas Medical Center – ICU department ( https://www.kansashealthsystem.com/giving/ways-to-give/make-a-gift )

To order memorial trees or send flowers to the family in memory of Edward Walker, please visit our flower store.