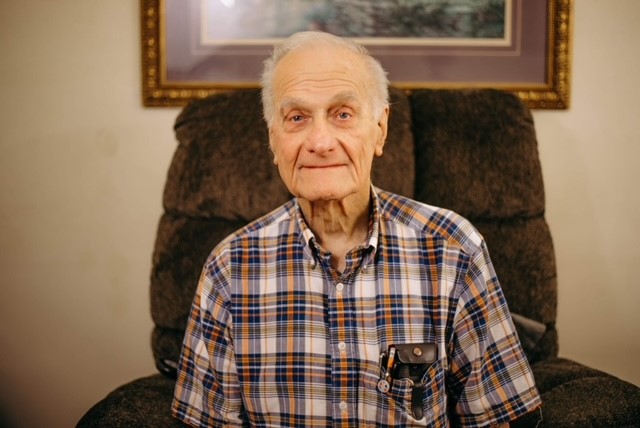 Chuck was born on August 24, 1929 to Emil and Louise Abend. He graduated from South East High School and soon after joined the United States Airforce. After his military service he began his 45+ year career as an instrument mechanic with TWA. It was at the airport restaurant where he met the love of his life, Betty Madison, and soon after they were married on April 26, 1956. From this marriage they were blessed with five children. Even outside of work, his natural talent for mechanics often had him tinkering and repairing anything that needed to be fixed. After retiring from TWA he operated his own home repair business as well as working for New Mark and Sharon Lane Nursing Homes. As someone who could never sit by idly, Chuck had many hobbies including playing the steel guitar in multiple country western bands throughout the Northland, tending to his garden of tomatoes and green beans, and flying (and sometimes crashing) his radio controlled model airplanes. As a first born American, he was incredibly proud of his German/Swiss roots and was an avid attendee to many of the Kansas City Swiss Society picnics, but what he cherished the most was the time spent with family. Chuck would often say “ Everyday is Thanksgiving at the Abend House” because he loved having family and friends over for a hearty meal, especially if it consisted of roast beef and mashed potatoes.

In lieu of flowers contributions may be made to the American Heart Association or the Arthritis Foundation.

To order memorial trees or send flowers to the family in memory of Emil "Chuck" Abend, please visit our flower store.