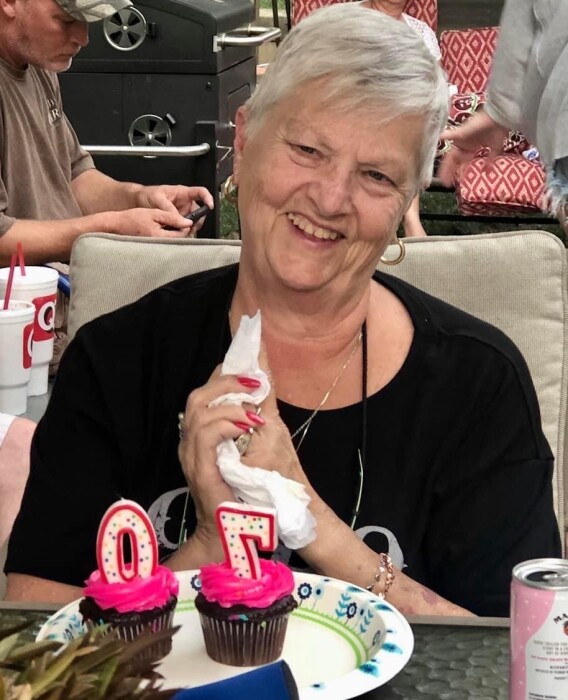 We are heartbroken to announce the death of our mother, Emma Irene Erwin, of Kansas City, MO. She passed away unexpectedly at the age of 73 surrounded by close family and friends on October 5, 2022.

Emma was born on July 26, 1949 in Springfield, Missouri to the late Leo Rhoden and Shirley James.

Emma was married to the love of her life, Dub Erwin, for 46 years.

Emma was a graduate of Oak Park High School in Kansas City, MO, class of 1967. She lived in San Diego for a few years and then moved back to Kansas City in order to be closer to family. She spent many years working at Smurfit-Stone Container in Kansas City, MO. After she retired, she went to work for HyVee and made many new friends there. Her last year was spent with her favorite school kids on her transport bus with Assisted Transportation. Her face would light up when she told stories about the special children she cared for.

Emma often said that her greatest accomplishment was her family. Family always came first. She was a wonderful mother who was always there when we needed her. She was a strong, fun-loving, and caring woman that insisted her family supported and took care of each other no matter what. She loved her entire family, despite their quirks and dysfunction. She worried about them, rooted for them, protected them, forgave them, and always kept on loving them.

She loved doing anything and everything that her family wanted to do, as long as she could join the party. If she was with her family, nothing else mattered. Most of her favorite things included water somehow. Going to her peaceful place at Pomme De Terre Lake, boating and fishing, canoeing the river, and an occasional cruise to the Caribbean too.

Emma also had a love of going to I-35 Speedway in Winston, MO to cheer on her late nephew, Cletus (Mudcat) Murray #21M. They had a very special bond, and she was his biggest fan before he passed away unexpectedly in 2019.

Emma was also preceded in death by her parents; her brother:Kenneth Rhoden (Bub); and her beloved dog: Alfie.

The family requests in lieu of flowers, please consider a donation to the ASPCA to aid in the prevention of cruelty to animals. http://www.aspca.org

A memorial service will be held on Thursday, October 13 at 1:00PM at the Lakeside Chapel of Terrace Park Funeral Home and Cemetery, 801 NW 108th Street, Kansas City, MO 64155.

To order memorial trees or send flowers to the family in memory of Emma Erwin, please visit our flower store.