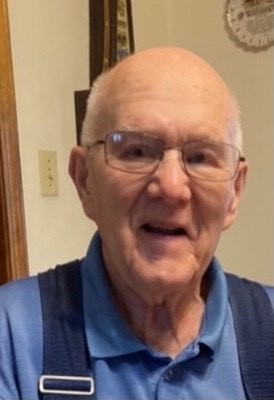 Jim was born on February 16, 1934. He was raised by his grandmother in the small town of Sanford, Maine, where he attended school and enjoyed spending his summers swimming nearly every day. He was a member of the high school marching band and was affectionately known by his classmates as the class clown. Soon after graduating high school, Jim enlisted in the United States Air Force and upon his return he met the love of his life, Ruth Emma Hamilton, (at Swope Park). The two were married on July 7, 1956 and had three children. Jim and Ruth moved their young family from Maine to Kansas City where he worked as a transformer repairman for General Electric. After retiring from GE, he then began working for the car auction until he again retired after 20+ years of service. Even in his retirement he always kept busy and could often be found atop his riding lawn mower with his kids and grandkids in tow. He took great pride in caring for his lawn and was known to mow 2-3 times a week. Jim also loved to dance and go fishing – though he never seemed to catch anything.

Jim is preceded in death by his father, William Willey; mother, Florida Supino; and wife of 61 years, Ruth. He will be fondly remembered and greatly missed by his daughter, Rebecca Willey of Independence, MO; son, Michael (Teresa) Willey of Liberty, MO; daughter, Nancy Felthauser of Claycomo, MO; sister; Barbara Benson of Shapleigh, ME; four grandchildren, Steven, Christopher (Nikki), Kyle, and Emma (Jamal); four great-grandchildren; Stevie, Michael, Alyssa, and Jax; and a host of many nieces, nephews, cousins and extended family.

To order memorial trees or send flowers to the family in memory of Francis "Jim" Willey, please visit our flower store.