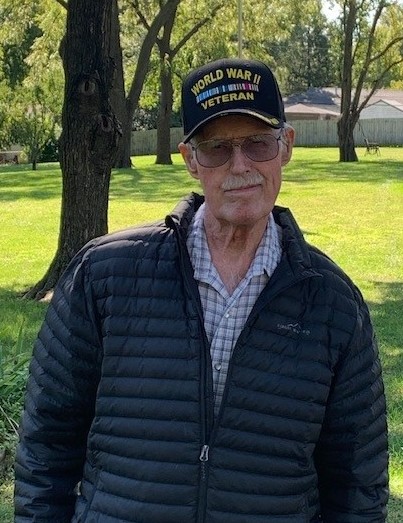 James joined the US Army Air Corp in September 1942 at the height of World War II and served as a radio operator aboard C46 Transport Aircraft flying countless missions over the Himalayan Mountains (The HUMP).  James received the Air Corp Flying Medal and the Distinguished Flying Cross.  James completed his military service September 1945 at the rank of corporal.

During his time in the Army, James met and married Mary Jane Butler of Lebanon, MO.  After his discharge from the Army, James and Mary made their home in the village of Oak View, in the North Kansas City, MO area. James started his forty-year career as a meat cutter for Safeway Grocery Stores and was the head meat cutter for the store at Vivion Rd. and Antioch Rd for more than 30 years.

James enjoyed his children more than anything and was a source of strength and understanding to them all.  For the past 70 years, James has enjoyed gardening in his ½ to 1 acre vegetable garden and manicuring his 3 acres which was always groomed like a park.  Jim spent much of his retirement helping his youngest son, Rick, with his business and taking care of his wife Mary until their passing in 2008.  Jim has always been described by all who met him as the nicest person they had ever met.  He was always happy to help anyone in need and seldom had a bad word to say about anyone.

The visitation will be at Terrace Park Funeral Home, 108th and HWY 169, Kansas City, Missouri on Saturday beginning at 10:00am with a memorial service at 11:00, burial will follow at Terrace Park Cemetery.

He was preceded in death by his wife of 63 years, Mary Jane Dallas; his son, Richard Paul Dallas; his parents; his grandson, Jason; his great-granddaughter, Jaden; his sisters, Doris Jean Norris and Bonna Bee Young.

We shall all surely miss him!

In lieu of flowers, donations may be made in his memory to the Veterans of Foreign Wars or Disabled American Veterans .

To order memorial trees or send flowers to the family in memory of James "Jim" Dallas, please visit our flower store.