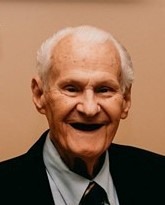 Rev. Jasper Lee Moberly of Kansas City, MO passed to his eternal home and touched the face of Jesus with peace and grace on Sunday morning, October 23, 2022, at St. Luke’s North Hospital. Jasper had been in poor health with some chronic issues for some time.


Jasper was born in Milan, MO on August 12, 1929 to John Earl Moberly and Mary (Reger) Moberly, who preceded him in death. He grew up there until he was 5 years old when the family moved to Kansas City, MO. He graduated in Kansas City from Northeast High School and continued his education at Calvary Baptist Bible College in St. Louis, MO for academic ministry roles in Christian Divinity. At the college, he met “the love of his life”, Virginia Lapeer, who was pursuing a degree in music. While studying for his degree, he pastored at Dell High Church in Sullivan, Mo. Later in Kansas City, he spent many years serving at Harmony Heights Baptist Church.


Jasper was a devout Christian and a Man of God, accepting Christ as his personal savior at a young age. He and Virginia were always involved in church activities wherever they lived until they were unable to attend due to health issues. However, religious programming on TV was an alternate spiritual guide for him.


In addition, during his life-journey, Jasper, in all ways, was well respected and trustworthy… a wonderful trait! He was loving, kind, soft-spoken, and a practical joker. He loved humor and was a devoted husband and family man.


Further, Jasper was a hard-working and wonderful provider for his family, having held several jobs in his career. First and foremost, he was a pastor on Sundays, performing required duties and seeing to the needs of his congregation. In addition to pastoral duties, Jasper worked full-time as “Controller of the Vault” at First National Bank in Kansas City for many years until his retirement in the mid-80s. He also worked at various other banks on Saturdays. To say the least, he made every minute of his life count along with family duties. Jasper will be greatly missed by his loving family and friends.


Funeral arrangements are under the direction of Terrace Park Funeral Home and Cemetery, 801 NW 108th Street, Kansas City, MO 64155 on Friday, October 28, 2022, with Rev. George McDowell officiating. This obituary may also be viewed on the funeral home’s website. Visitation services will be at 1:00 p.m. with the memorial service following at 2:00 p.m. Interment to follow in Terrace Park Cemetery where he will be laid to rest beside his bride, Virginia. In lieu of flowers, donations may be made to: St. Jude Children’s Research Hospital, P.O. Box 1000, Dept. 142, Memphis, TN 38148. Donation service by phone: 800-822-6344. Donation service online: stjude.org/donate.

To order memorial trees or send flowers to the family in memory of Jasper Moberly, please visit our flower store.