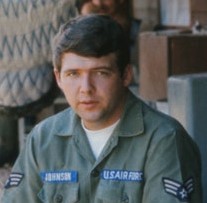 Kent is survived by his wife Cindy Young-Johnson of Kansas City; his daughter Kate (Joe) Bancks and grandchildren Esther, Benjamin, Miriam, and Jonah of Gladstone; his son Andrew Johnson of Kansas City; his brother Danny French and family; stepchildren Carrie (Al) Parker and family, Charles Dibble, Alex Lohn (Emily) and family. Kent was preceded in death by his parents, as well as many aunts, uncles, cousins, and several dear friends.

Born 18 October 1947 at Saint Luke’s Hospital in Kansas City, Missouri, the son of Victor Roland Johnson and Shirley Louise Terrill Johnson, Kent grew up playing in the streets of North Kansas City and exploring the wooded hills of Briarcliff. He was a proud member of North Kansas City High School’s largest graduating class to date (1965) and loved all things Kansas City.

Kent attended Kansas State University from 1965 to 1969, studying architecture. When his number was the fifth chosen in the 1 December 1969 Selective Service draft lottery, Kent enlisted in the United States Air Force. He served four years as a photo interpreter in the US Air Force, including 19 months in Thailand (1972-1973) at the NKP RTAFB as part of the 8th Air Force Wing Intelligence. He achieved the rank of Sergeant before completing his USAF commitment at Offutt AFB, Nebraska.

Kent was a talented watercolorist who finished his degree at the Kansas City Art Institute and became a freelance graphic designer. Working for various art studios and local marketing firms, Kent’s interest in technology made him an early adopter of graphic arts software. At that time, he had not met another graphic artist in Kansas City with whom he could compare notes or from whom he could learn, but he enjoyed his solitary late night study and tinkering sessions—often with a big bowl of buttered popcorn. Kent loved his career and especially the creative people with whom he worked. Two highlights were designing memorabilia for the Kansas City Chiefs 35th anniversary celebration and, of course, T-shirt logos for BSA Troop 9’s Osceola adventures.

While in college, Kent met his first wife Diane Bunting (Keys) and joined her wonderful family in 1968; during their 28 years together, he was blessed with daughter Kate and son Andrew. Following their divorce, he married Cindy Young, with whom he recently celebrated their 19th wedding anniversary. Kent and Cindy were drawn together by their common experience as graphic artists and love of music, especially Elton John and Neil Young. In recent years, Kent's favorite past-times included: trading his Air Force and NFL patch collections, researching family history, making memories with his four little peppernuts, and gleefully celebrating every Chiefs victory with his best buddies. Kent considered his children and grandchildren to be his most precious legacy. His wry take on life, artistic talents, eclectic taste in music, appreciation of nature, favorite recipes, and devotion to family will live on through them.

Our special thanks to the staff at Saint Luke’s North Hospital-Barry Road and Saint Luke’s Hospice House for their compassionate and thoughtful end of life care. Thank you, family and friends, for sharing your condolences and favorite memories of Kent in the comments below. Please, help us give the gift of independence and companionship in honor of Kent’s courageous battle against cancer by sending memorial tributes to K9s for Warriors.

To order memorial trees or send flowers to the family in memory of Kent Johnson, please visit our flower store.