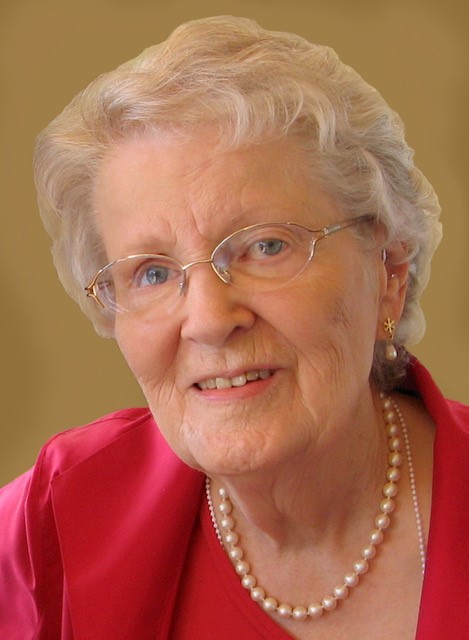 LaVon was born Bertha LaVon Hartschen on September 23, 1925, on a farm near Hatfield, MO, to Charles and Emma Elva (Parman) Hartschen. She was the fourth of five children. Being the only girl, she readily admitted to being spoiled. Everyone in the family called her “Sis” and everyone else called her LaVon. She never cared for “Bertha,” which was given to her by the midwife. As she grew up, she learned all the skills required of a farm girl and farmer’s wife. (But she didn’t want to live on a farm…and she didn’t want to marry someone whose last name was hard to spell. She got the first wish, but not the second.)

Of course, LaVon did her part to help the family during the lean years of The Great Depression. Her mother taught her to cook, sew, plant a garden, tend the chickens, and do the laundry with a tub and washboard. And her mother insisted that she learn to play the piano, which she did at home and in church. However, as soon as she graduated from high school she moved to the “big” town nearby, Mt. Ayr, IA, where she lived with her uncle and aunt, had fun with her girl cousins, and went to work as a receptionist in the office of Dr. Hill.

By then WWII was raging and at some point she began working at the AAA (Agricultural Adjustment Administration) office. One of her jobs was to trace maps for people buying and selling property or engaged in property disputes. There were no copy machines in those days.

Three of her co-workers were sisters, and they decided that pretty, young LaVon was just the girl for their brother, Clinton Spencer Sheumaker, who was serving in the Army Air Corps in Europe. She met him when he came home on leave, and they started dating immediately and often. In his autobiography, Clint remembered LaVon being a “knockout.” They were married on September 7, 1946, in Redding, IA.

When the war was over and Clint was discharged, they settled in Pammel Court – the married student housing at Iowa State University. She worked in the school store helping returning servicemen while Clint finished his degree in Agricultural Engineering.

Clint’s first job was with the Soil Conservation Service in Newton, IA, where their first child, Craig Clinton Sheumaker, was born September 9, 1949. Before long, the family moved to Emmetsburg, IA, where Gary Alan Sheumaker was born December 26, 1952. After two more moves they landed in Omaha, NE, where Rodney David Sheumaker was born May 6, 1959.

Finally, in 1963, the family settled in the Kansas City, MO area where LaVon and Clint would spend the rest of their lives. They became active members in the Meadowbrook Methodist Church, and had key roles in the design and construction of a new sanctuary.

LaVon and Clint were also involved with Habitat for Humanity and Meals on Wheels. And besides raising her boys, LaVon had two additional jobs. First, she was an “Avon Lady” for several years; then she fulfilled a lifelong dream to become a hairdresser. As soon as Rod was old enough, she went to school and then opened a beauty salon in their home, which she operated happily for more than twenty years.

When Clint retired in 1986, they started traveling. LaVon immediately applied her skills as homemaker and seamstress to making each of their RVs a home on wheels. Over the years they visited most of the United States, parts of Mexico and Canada. They joined family members for tours of Continental Europe and Great Britain as well as cruises to Alaska and Hawaii. Most winters were spent in Texas.

When Clint became infirm, they moved to an apartment at Foxwood Springs in 2009. Having been avid bridge players all their married lives, they continued playing many times per week. LaVon also led exercise classes – a new experience for her. After Clint passed away in 2013 she continued to live independently, nurturing close friendships and leading an active life until she developed dementia in the last few years.

LaVon loved to spend time with her large extended family, and always made people feel loved and cared for. She was a very good cook and is remembered especially for her lasagna, popcorn, peanut brittle, chocolate chip cookies and gooseberry pie.

To order memorial trees or send flowers to the family in memory of LaVon Sheumaker, please visit our flower store.