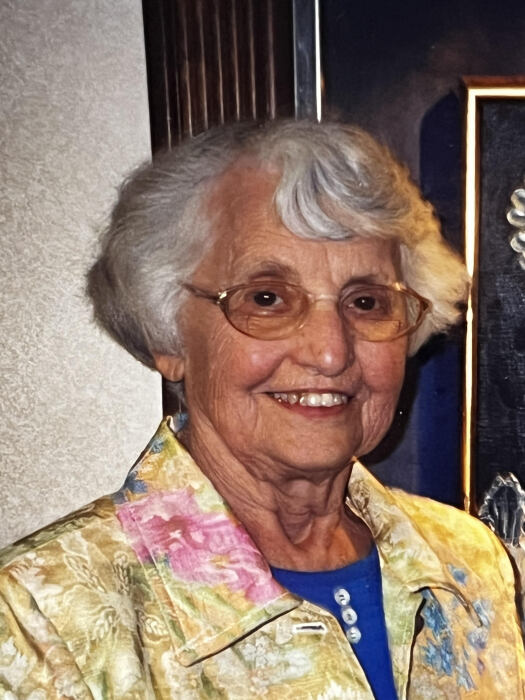 Margaret (Peggy) Ellen Turner Gamble passed away on Wednesday, April 6 at the age of 94. She was preceded in death by her husband, Bill, son, Rick, two brothers, a sister and many friends. She is survived by her daughter, Kristy (Larry) Schmitz and sons, Tom (Christi) Gamble and Brad (Jennifer) Gamble, daughter-in-law Tracey, six grandchildren and seven great-grandchildren. Her Celebration of Life service will be Saturday, April 23 at 2:00 pm at Avondale United Methodist Church, 3101 NE Winn Road, Kansas City, Missouri.

Margaret was the youngest of four children born to F.S. (Duke) and Laura Turner on a dairy farm near Belton, Missouri. After attending the High Blue elementary school, she graduated from Belton High School in 1940 and joined her sister, Alice, at Park College for two years, where she became Peggy. She transferred to Northwest Missouri Normal School, where she joined the Sigma Sigma Sigma sorority and met and fell in love with the center of the Bearcat football team. After teaching one year in Keokuk, Iowa, she and Bill were married on August 7, 1949 at the home of her parents. They shared a wonderful, loving life for 63 years, until his death in June of 2013.

Peggy and Bill raised four children—Kristy, Tom, Brad, and Rick. They were very active at Avondale United Methodist Church, which really was their church family. Peggy and Bill helped the Avonaires Sunday school class serve over 50 Ham and Bean Dinners and Peggy was active in the Sara/Clara Guild and United Methodist Women. Peggy taught kindergarten, second, and first grades in the Bethany, North Kansas City, and Kansas City school districts, with the majority of her years at West Englewood in North Kansas City. Bill was also a teacher, which allowed him to have a second job as a season ranger at Yellowstone National Park. Each June Peggy was happy to pack up her Kansas City house and move to whatever accommodations were offered for a “Yellowstone house,” and spend ten weeks camping and fishing in the cool mountains. She even served as a volunteer ranger a couple years when the children were grown. When, after over 15 summers, the position of seasonal ranger was no longer an option, they spent one summer in Kansas City before applying to work in the souvenir shops, where they worked for several more summers. Yellowstone really was their second home.

In retirement they continued to be very involved at Avondale UMC, where Peggy was very active in the “Little House” re-sale ministry. She enjoyed having her two granddaughters and four grandsons nearby, and hosted many holiday meals in the earth contact home they designed and had built in 1981. After Bill’s death she moved to Addington Place in Lee’s Summit and, after a broken hip, to The Villages of Jackson Creek memory care unit in Independence. She finally won her 12 year battle with Alzheimer’s and joined Bill, Rick, and her brothers and sisters in a heavenly celebration! Her family misses her terribly, but is so glad she is no longer suffering with this dreaded disease, but is instead the happy, loving mother and grandmother they remember!

Peggy will be lovingly remembered in a worship service at her church home on Saturday, April 23 at 2:00 pm, with visitation after the service. In lieu of flowers the family suggests a donation to the Alzheimer’s Association or the church.

To order memorial trees or send flowers to the family in memory of Margaret "Peggy" Gamble, please visit our flower store.