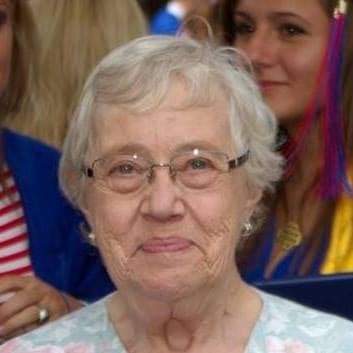 Mellie Ann Kelley Weekes — selfless, gentle, kind and cherished by all who knew her—passed away April 10, 2022, in Kansas City, MO.

Mellie was born in Houston, MO, on August 26, 1935, to George Oren and Katherine Elmore Kelley. Mellie was an active member of the First Baptist Church of Houston until her graduation as valedictorian from Houston High School in 1953.  After graduating summa cum laude from SMSU in 1956, she taught high school math in Desoto, MO for a year before moving to Kansas City where she worked at Southern Bell with the development of telephone circuits.  Called to further her education and capacity for service, she moved to Fort Worth, TX, where she received a master’s degree in religious education from Southwestern Baptist Theological Seminary.

Mellie had a servant’s heart throughout her life. She cared for her extended family, taught typing at Oak Park High School, and worked as a secretary at Farmland Industries, KU Medical Center, and Liberty Hospital in the Kansas City area.  While in North Carolina, she served as secretary in the Department of Government and History at Campbell University in Buies Creek.  Throughout her years in Kansas City, Mellie was an active member of Englewood Baptist Church, where she gave and received so much.  Mellie loved words and numbers, reading, needlework, watching basketball and football, ice cream, and crossword puzzles.

She is preceded in death by her husband, K. David Weekes; parents, George and Katherine Kelley; and brother, Roger Lee Kelley.

Visitation will be held at Terrace Park Funeral Home and Cemetery in Kansas City on Monday, April 18, at 1:00 PM, followed by funeral services at 2:00 PM, with dear family friend Rev. Robin Bell presiding. The family will hold a private graveside service following the funeral.

In lieu of flowers, please consider a donation to Turning Point, a ministry supporting families by providing basic needs and education, equipping them for self-sufficiency.  Turning Point is located on the former campus of Englewood Baptist Church. https://www.aturningpointkc.org/

To order memorial trees or send flowers to the family in memory of Mellie Weekes, please visit our flower store.