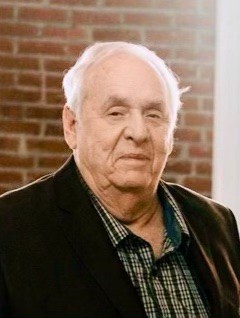 Michael ‘Mike’ Eugene Mathews, 78, passed away on December 12, 2021 surrounded by love. Mike was born on May 21, 1943, in Dodge City, Kansas to Warren and LaVera Mathews.  He grew up in Newton, Kansas where he played football at Newton High School and met his high school sweetheart, Sharon.  They were married on April 6, 1963 Newton, Kansas.

Mike moved to Kansas City, Mo after beginning his life long career as a Sheet Metal Mechanic with TWA and American Airlines.  He also served his community as an accomplished Deputy and Captain in the Platte County Sheriff’s Reserve Unit as well as the Chief of Police for Houston Lake, Mo. As he neared retirement, he also served part time for the Northmoor Police Department.

Although Mike was very proud of his accomplishments in his career and as a police officer, it was his family that made him most proud.  He spent 58 years married to the love of his life, Sharon.  He loved to laugh, play and debate everything with his three children, Debbie, Shanon and Grady.  He was a loving grandfather who loved creating memories and laughs for his grandchildren.   You could see the pride and love in his eyes when he talked about his great-grandchildren.

Mike was an avid fisherman and loved to spend time at Pomme de Terre Lake.  He loved to watch his Green Bay Packers and Kansas Jayhawks.  He was always up for an adventure and loved to go on cruises and vacations with Sharon.   He will always be remembered for his silly personality, exaggerated stories and the love he had for his family.

He was preceded in death by his parents; daughter, Shanon; son, Grady; and grandson, Mathew.

In lieu of flowers, donations can be made to Friends of Parkville Animal Shelter or Northcare Hospice House.

To order memorial trees or send flowers to the family in memory of Michael Mathews, please visit our flower store.