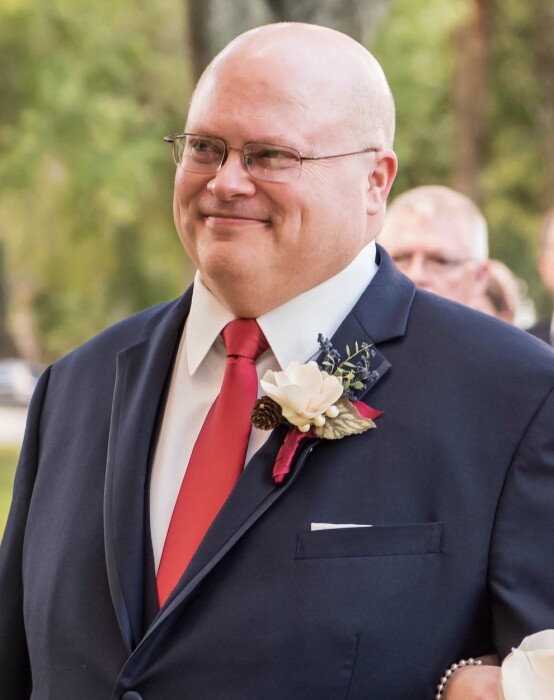 Michael Garrett Roberts, known for having the world’s most boisterous laugh and smile, passed away after a courageous battle with Covid pneumonia on Friday, August 20, 2021, in Kansas City, MO.  Michael was just 56 years old.

A Memoriam and Celebration of Life Service will be held at Northland Cathedral’s Worship Center located at 101 NW 99th St., Kansas City, MO on Thursday, August 26, 2021, at 6:00 pm. Services will include an Honor Guard presentation and thereafter, guests are invited to share their memories of Michael.

Michael was born on December 21, 1964, in Melbourne, FL, the son of Melvin and Kathryn (Whybrew) Roberts.  He was raised in Melbourne and was a graduate of Eau Gallie High School, the place where he met his beautiful future wife and high-school sweetheart, Katherine Gerry (Katie).  Shortly after graduation, Michael joined the U.S. Navy as a submariner on the USS Bluefish, a Sturgeon-class fast-attack submarine whose motto was ‘Blue Thunder from Down Under.’  During his time of service, he traveled to many locations around the world. Michael proudly served under, and is a veteran of, Desert Storm.

After an honorable discharge from the U.S. Navy, Michael utilized his training to springboard into his next career as a nuclear health physics technician, refueling nuclear power plants throughout the United States. On June 26, 1993, Michael married his high-school sweetheart, soul mate, and the love of his life, Katie Gerry.

After his military and nuclear refueling career, Michael decided to become a pharmacist, attending the University of Florida and in 2003, graduated as a Doctor of Pharmacy.  He began his next career as a retail pharmacist and six years later, specialized in the heavily regulated nuclear pharmacy field in 2008. He then relocated to Kansas City, MO to work as a Nuclear Pharmacist for IBA Molecular, now known as SOFIE. Michael was a Nuclear Pharmacy Manager and a Radiation Safety Officer for SOFIE until his untimely passing.

During his multiple careers, he worked tirelessly to ensure the integrity and accuracy of his work. Michael always continued to hone his craft and mentored others to be their own personal best. With Michael’s extensive nuclear background and training, he gained a knowledgebase that was deep and wide and became a subject matter expert in his field.

Michael’s career didn’t afford him the luxury of much time off however, when he had spare time, he thoroughly enjoyed cooking, brewing homemade beer, making sausage or fruitcakes, fishing, and shooting. His family was everything to him as was his Christian faith and he opened his home and heart to friends and family, no matter what. He was a long-time member of Northland Cathedral and made wonderful friendships there. He was very modest, humble and a phenomenal family man, father, son, soul mate, and took care of his family’s needs before his own.  He had a beautiful smile, a big personality, and brought joy to everyone around him. At the time of his passing, he was preparing for his daughter’s college needs and seeking a permanent home for his family. Michael left this world too soon but while here on Earth, he made profound sacrifices for those he loved. He will be deeply missed, is loved beyond measure, and may he rest in peace with our Heavenly Father.

In lieu of flowers, donations may be made in the name of Michael Garrett Roberts to The Gary Sinise Foundation (https://garysinisefoundation.org) or St. Jude’s Children’s Hospital (https://stjude.org

To order memorial trees or send flowers to the family in memory of Michael Roberts, please visit our flower store.