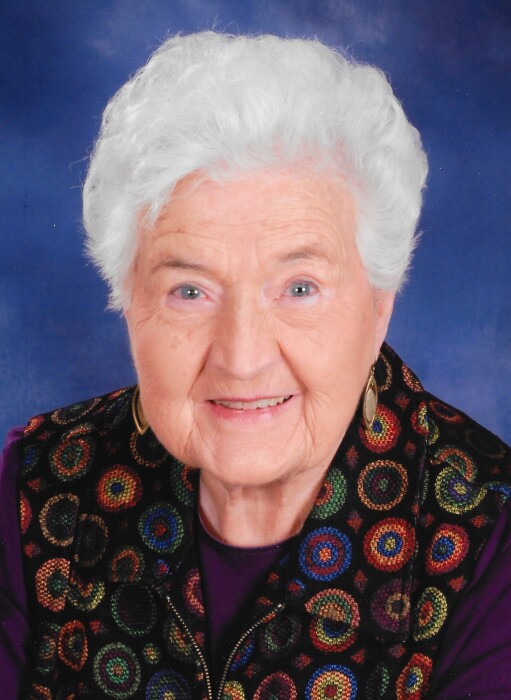 Mildred or sister as her mom fondly called her was born on December 22, 1926 near Chillicothe, MO to Lewis Edward and Mary Lavanna (Arr) Collins. Millie moved to Kansas City to secure employment right out of high school and soon met a dashing young man named Harold Robinette. Not too soon after their meeting, they were wed on November 6, 1948. At that time, she was employed as a secretary and eventually an office manager with National Fire Suppression in Kansas City, KS for 20 years, and with Century Fire Sprinkler in Kansas City, KS for five years. During this time, she also helped raise a nephew, Larry Wymore and a niece, Leanna Curiale, along with two wonderful sons.

Harold and Millie first retired to the Lake of the Ozarks, eventually moving to Sun City West, AZ, before returning to the KC area in 2003.After the passing of her husband in 2006, Millie lived with her son, David, and his wife, Elise, in Gladstone. MO.

Millie was never one of idle hands. She was an amazing quilter, avid reader, and a busy volunteer for her church, Fairview Christian Church, and many other organizations. If Millie wasn't quilting or sewing, she was reading. But if family was visiting, everything stopped to be with them. She loved spending time with her family, especially playing with her great grandchildren.

In addition to her husband, Millie is preceded in death by a son, Ted Robinette, nephew, Larry Wymore, and two grandsons, Charles W. Robinette and Brandon Robinette. She is survived by a brother, Clifford (Jan) Collins of Bradenton, FL; son, David (Elise) Robinette of Gladstone, MO; a niece, Leanna Curiale, Clinton, MO; grandsons, Vincent (Lauren) Robinette of Parkville, MO and Nicholas (Dakotah) Robinette, Mechanicsville, VA; and five great grandchildren: Alex, Eloise, Sullivan, Layla and Maxwell, as well as other loved nieces and nephews, along with many who thought of her as mom.

To order memorial trees or send flowers to the family in memory of Mildred Robinette, please visit our flower store.