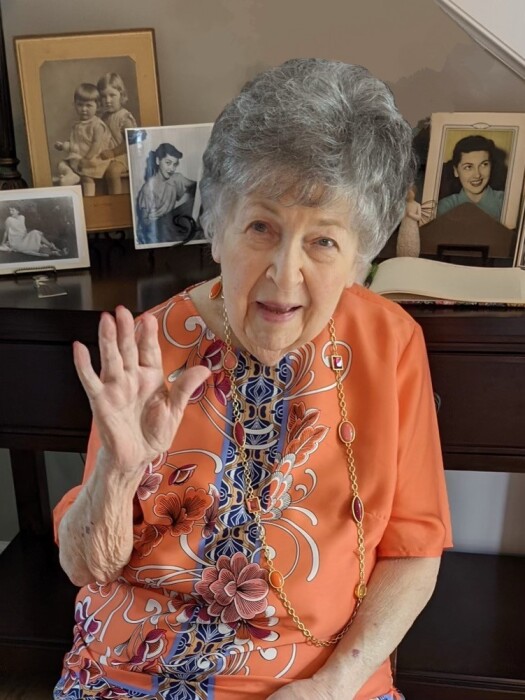 Nancy Adeline Hoddick passed away on Thursday, September 29, 2022, at Tiffany Springs Health Care Center at the age of 91.

Nancy Adeline Moulton was born in Detroit, Michigan on May 27, 1931. She was the daughter of Howard and Sylvia Moulton. She was the second oldest of 4 children. Nancy had an older sister Joan and two younger brothers Richard and Larry.

One year after graduating from Mackenzie High School she went on a blind date where she met Jack Hoddick. After dating only a few months, they were married. Nancy was 19 and Jack was 22. Both Nancy and Jack worked at General Motors and or Ford Motor Company. One of Nancy’s earlier employments was with the Ford Rouge Detroit Glass Plant. Two years after Nancy and Jack were married, they had their first of 6 children. All 6 children were born within 11 years, 4 girls and 2 boys.

Detroit had a lot of snow to either shovel or play in, backyard ice rinks, great pizza, and ethnic food. The family enjoyed vacationing in cabins at East Tawas, Michigan on Lake Huron. In 1966 Jack was transferred from Detroit with Ford Motor to the Claycomo Plant in Kansas City, Missouri. After moving to Kansas City, the family began to flourish. With wide open spaces and the Mid-West Lifestyle it offered great opportunities for exploring and raising a family. There were swim meets, school plays, sports, and the marching band. Nancy loved for her and Jack to load up the family in the station wagon to go on Sunday drives, explore historical places, nearby parks and picnics at lakes.

Nancy worked all through her years in Kansas City in Data Entry at Commerce Bank where she retired at the age of 60. After Nancy and Jack parted ways, Nancy filled her time supporting and traveling with the Winnetonka High School Marching Band with the 2 younger children still at home, Sandy and Larry.  She also enjoyed traveling to California, Virginia, Florida, Pennsylvania and back to Michigan to visit family. Nancy loved visiting familiar places, as well as new and historical landmarks. She even made her way overseas to Germany to visit her daughter Sandy and son in law Steve who were stationed there with the Military.

Nancy’s true passion was always her family! She babysat and had grandchildren sleepovers. Her grandchildren loved baking cookies with her. For years she baked her old-time recipes for the holidays. At Christmas she came in tow with containers filled with her yummy cookies and joyfully passed them out to each family. Nancy boasted to everyone she had a “large family! She had 6 children, 19 grandchildren and 22 great grandchildren. She was proud to say she had been to almost all her children and grandchildren’s weddings. She raved that she had done the twist at each of the weddings.

The family was fortunate to have her all these years. We celebrated her 90th birthday with a Big Bash last year in May. Nancy had lived over 90 years on her own. January of this year her family moved her to Tiffany Springs Health Care Center. The past few months had been a challenge for her. She recently said, “I’ve traveled and enjoyed my “large” beautiful family for all these years. What more could I ask for!” Her final wish was to go to Stroud’s. Her wish was honored the Sunday before she passed. It truly was a glorious occasion for all!

May the Lord Bless her and keep her in her Eternal Life.

In lieu of flowers, contributions may be made to the Children's Mercy Hospital.

To order memorial trees or send flowers to the family in memory of Nancy Hoddick, please visit our flower store.

Celebration of Life with the Dinner Reception