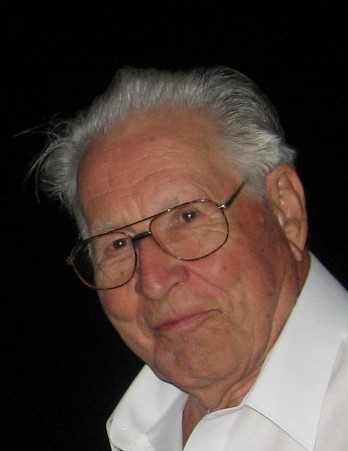 Bob was born in Kansas City, Missouri on June 13, 1925, the son of William Albert and Eliza Antoinette (Francis) Merrill.  He attended Fairmount School, Northeast High School, Park College, the University of Kansas City, and the University of Kansas, where he received his master’s degree in speech and theater.  He and his wife, Donna (Spellman), married on May 29, 1952.  They had four children, Nancy, Catherine, Robert, and Barbara.

He was a man for all seasons.  A genial, loving, hard-working, scrupulously honest man who would do anything for his friends and family, he also had thousands of jokes and songs tucked away in his head.  He loved to ramble, particularly in his younger days. All his life, he loved music and singing.  As a child, he sang at Westminster Presbyterian Church in Fairmount, where his mother was the organist and his three brothers were also in the choir.  He sang at Grace and Holy Trinity Church when he was eight, traveling there at night by bus from Fairmount to practice.  He wrote music and sang in the a capella choir and in a quartet at Park College.  He loved to whistle, and on rare occasions, he could whistle a triple tone.  He sang and played drums and bass in various bands during the l950’s and 1960’s.  He especially loved the Hi-Lo’s, Stan Kenton, and Pat Metheny.  His friend, Kuno Laren, called him a “certified genius” in music and lyrics.  One great regret of his life was that he hadn’t pursued music further.

He was a worker all his life.  He once counted up the number of jobs he had had, and the total was over forty.  They included delivering diapers, delivering cigars, taking care of plants in a nursery, driving a truck, doing lawn maintenance, testing engines at Pratt-Whitney during the war, painting houses, acting as assistant manager of Rockhill Theater, teaching at Park College, teaching at Manual High School, singing on demonstration records, selling time at a radio station, raising cattle, leasing cars, and owning and operating a recording studio.  He and his partner, William Wesemann, owned an advertising agency, Merrill-Wesemann Advertising.  After 32 years in the agency, Bob retired in 1987.  He and his wife bought 17 acres in Holt, MO, where he cleared brush, built fences, and mowed 17 acres as many as 20 times a year.

Bob and Donna loved to travel, especially in England and Scotland.  During the 1980’s, they spent many summers there, mostly traveling from one B and B to another.  Their favorite places included the Scottish Highlands, Iona, and Drumnadrochit.  Later, he loved the farm:  the deer coming to eat the apples, the turkeys leaving their tracks in the snow, the smell of black locust flowers on the wind in the spring, the glitter of ice on the trees, and Spike (aka Thunderfoot) running joyously in the field.  Bob chittered to the squirrels and sang to the birds, and they chittered and sang back to him.

He was a member of a generation that is almost gone.  The old truisms were his truisms.  His word was his bond.  He gave a good day’s work for a day’s pay.  His yes was yes, and his no was no.  He did no harm, if he could help it.  He never cheated on his income tax.  He valued his business clients, most of whom remained with him his entire working life.  He was defrauded twice in his life by persons whom he’d trusted.  Most likely, he could have reduced the incurred debt in some way but, quoting Abraham Lincoln, he said that if you make a bad bargain, you should hug it all the tighter.  He paid every cent.

He helped his neighbors.  He was one of many persons in the Holt-Kearney area who worked against the proposed Holt dump in the 1990’s, and he was proud that the dump siting was defeated.  He was sorry that undulant fever had prevented him from fighting in World War II along with his brothers, but he was proud of his service in the Missouri State Guard and Missouri National Guard.  He loved his country.   He loved his wife and told her often that she jumpstarted his day.  He loved his children.  They had only to ask, and he was there for them.  He had an almost clear conscience.  The sins of omission bothered him, but his sins of commission were rare.  He treasured his friendships and kept in touch with persons he had known and loved as a child, as a young man in college, and as a businessman.  He was a happy man who made up jokes, songs, poems, and riddles while he was mowing on his tractor.  A friend told him once that, at any party, he could talk to anyone and find that the two of them had something in common.  He had a thousand stories and told them well.

In 1994, he was run over by a tractor/brush hog.  The accident almost severed his left arm, and he also had nine or more broken ribs and two dislocated collarbones. In spite of his injuries, he managed to walk two blocks up a shrubby hillside to get home, where his wife called 911. Dr. Richard Curnow and Dr. Fred Thompson very skillfully put him back together at Liberty Hospital.  The operation probably would not have been attempted five years earlier, he was told later.  Throughout the two-year period after the accident, when continued infection resulted in several subsequent surgeries, he was always optimistic.  He had complete faith in his doctors—well deserved, since his arm became quite functional.   Had it not, he would have continued to have faith that they had done their best.

He wasn’t afraid of dying.  During the ambulance ride to the hospital in 1994, he died twice and was resuscitated by the volunteers of the Holt Fire Department.  He said and believed that death was not frightening.  He was ready to go at any time.

He was preceded in death by his wife, Donna, his parents, his brothers, William and Don, his two sisters, Jean Merrill and Helen Etter, and his son, Robert A. Merrill. He is survived by his brother, Lane Merrill, of Houston, PA; his daughter, Nancy Sayed,, of Holt, Missouri; his daughter, Catherine Merrill, and her husband, Mike VanZant, of Holt, Missouri; his daughter, Barbara Reed, of Overland Park, Kansas; eleven grandchildren; and  eight great-grandchildren.  His death leaves a hole in the world for all those who loved him.

To order memorial trees or send flowers to the family in memory of Robert Merrill, please visit our flower store.