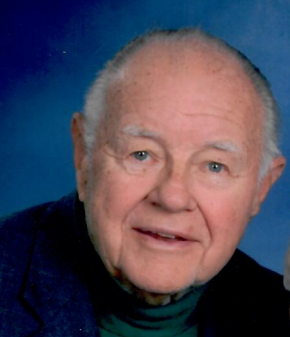 Robert “Bob” Frederick Niemann, 89, made his journey to heaven on Tuesday, April 20, 2021 at his home at Riverstone Retirement Community in Kansas City, MO.  Visitation will be at King of Kings Lutheran Church 1701 NE 96th St, Kansas City, MO on May 1 at 9:30 am followed by the funeral service at 10:30.  Graveside services will be held following the service at Terrace Park 800 NW 108th St, Kansas City, MO 64155.  Memorial contributions may be made to King of Kings Lutheran Church.

Bob was born July 23, 1931 in Leavenworth, Kansas the son of Herman F. Niemann and Olga E. Haunschild Niemann.  He was the first baby born at the Leavenworth Hospital.  He grew up in Farley, MO and attended St. John’s Lutheran Church which started his strong faith in God.  He attended Parkville High School where he played football, basketball, and graduated in 1949. Bob attended the University of Missouri – Columbia and earned his bachelor’s degree in Business Administration in 1953.  While in Columbia he met his future wife, Ann Shenkner.   Upon graduation he joined the Army and served as an Auditor in Virginia.  On June 25, 1955 Bob and Ann were united in marriage in Weston, MO and have been married for over 65 years.  They joined Holy Cross Lutheran Church and began raising their family in the church.  In 1968 Bob and Ann became founding members of King of Kings Lutheran Church where they grew rich in faith, fellowship, and friends.

Bob was the controller for Cook Chemical Company also known as Realex Corp where he worked from 1955 – 1980.  Throughout this time, he and his bride created their home in Hamilton Heights in Gladstone, MO.  He loved working with a hammer and nails, so after retirement from the corporate world Bob started his own handyman company.  He painted houses, built decks, refinished basements, and built his own home in Trimble, MO.

Bob and Ann were able to travel to 6 continents and ALL 50 states.  Colorado was one of his favorite places to visit so together with Ann they bought a condo in Breckenridge, CO where they entertained family and friends for 25 years.  He loved to hike, bike, and ski, basically he just loved being outside doing stuff.  Bob was an avid Kansas City Chiefs, St. Louis Cardinals, and Missouri Tigers fan.  His favorite past times were mowing his lawn with his orange tractor, playing bridge, golfing, following the stock market with his friends at the Sell or Buy (SOB) club, and celebrating holidays and birthdays with his 2 wonderful children and in-laws, 5 loving grandchildren and many of their friends, his sister, nephews and great-nieces and great-nephew.

And Bob said MIZ and everyone replied ZOU!

To order memorial trees or send flowers to the family in memory of Robert Niemann, please visit our flower store.