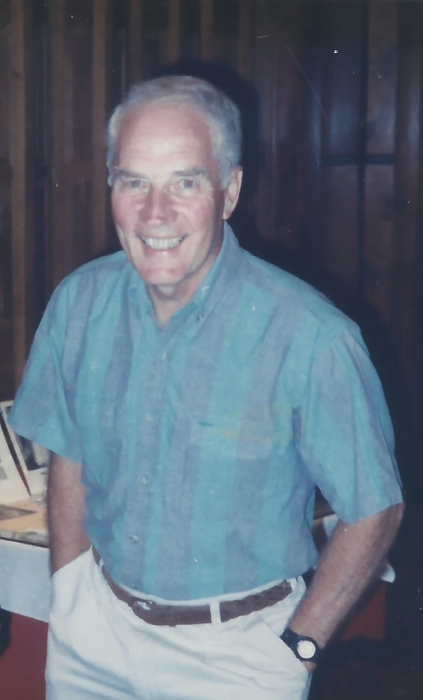 Ross Merlin Williams, 91, of Kansas City, MO passed away peacefully on December 10, 2022 at McCrite Plaza in Briarcliff. He was born to the late Floyd Alma (Buck) and Louise Williams on November 12, 1931 in Prescott, Iowa. He graduated from Prescott High School in 1949. He enjoyed playing sports while in school and excelled in basketball.

Ross continued his education at Simpson College in Indianola, Iowa on an academic scholarship for two years before enlisting in the Navy.

Ross served in the United States Navy from 1952 to 1954. He served during the Korean War and was stationed in Rhode Island for most of his service.

Ross and Phyllis met while he was completing his college degree after his discharge from the Navy in Iowa City and Phyllis was working as a nurse. They married in 1955 and have been married for 67 years.

Ross completed the Bachelor of Science in Commerce degree at the State University of Iowa in Iowa City in 1956. The Hawkeyes remained one of his favorite teams to follow in sports.

He was employed by United Investors Life Insurance Company in Kansas City, Missouri from 1962 to 1990. He retired from work as the Vice President of Underwriting after moving with the company to Birmingham, Alabama.

Ross enjoyed watching local school sports, fishing and participated in a golf league well into his eighties. He also became an accomplished long arm quilter during his retirement years in Platte City, MO. He was the volunteer treasurer for the United Methodist Church in Platte City for several years and enjoyed volunteering at the local thrift store In Platte City.

It was very important to Ross to maintain his friendships with his classmates from Prescott and attended the local fall festival for many years to keep in touch with them.

Ross was a man who loved spending time with his family. His grandchildren and great-grandchildren were his joy. He will be missed dearly.

He was preceded in death by his parents; two sisters: Lois (Harold) Townsend, and Marjorie (John) Fulford; and great grandson: Leland Bradley.

Ross was a very generous person. Please feel free to donate to a charity of your choice in his memory. Here are a couple of suggestions that were important to Ross - KC Hospice or St. Judes Research Hospital.

To order memorial trees or send flowers to the family in memory of Ross Williams, please visit our flower store.