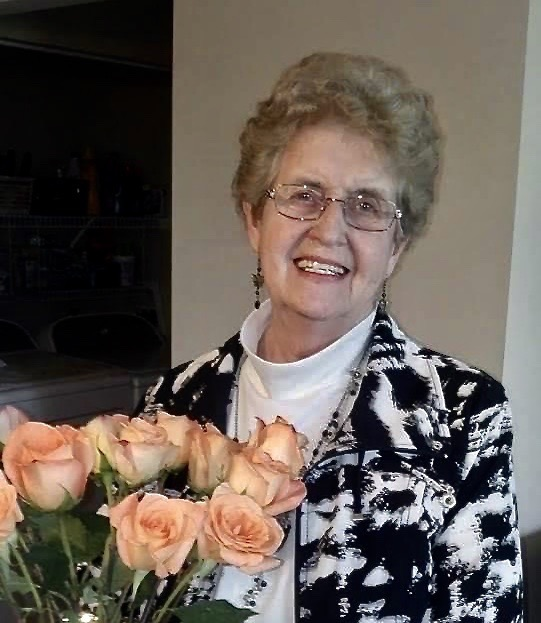 Virginia, age 92, a loving and loyal wife, mother, grandmother, great grandmother and daughter, died May 31 of Covid-19 at her home at McCrite Plaza at Briarcliff, Kansas City, MO.

Virginia was born on April 30, 1928 in Garnett, KS, to Ray and Ethel Barr. Virginia’s childhood in her small town with two brothers and one sister was punctuated by her love for her family, church and school. She nurtured her artistic skills, particularly music, at Garnett High School, and attended college at Ottawa University for two years, and K-State for another where she majored in mathematics before switching to education.

Virginia met the love of her life, Wayne Doyle Alban, at the Garnett bus station where they were returning to their respective universities (KU for Wayne.) They married June 2, 1950, and remained married until Wayne’s death in January 2013. They lived in three homes: Lawrence, KS, Independence and Kansas City, MO, and had four daughters.

Virginia shared her many talents with her daughters, grandchildren and great grandchildren, particularly her love of sewing, crafting and music. She was the most amazing seamstress, making her own wedding dress, and wedding dresses for two daughters. For many years, she was the soloist in the church choir, and at one point, she and her daughters sang folk music on local groups' programs. She worked as a preschool teacher, substitute teacher and teacher’s aid before she and Wayne retired. They then traveled in their RV across the country­—spending many winters in Tuscan, AZ, where they made many friends and enjoyed playing pool, learning new woodworking, jewelry-making and crafting skills and hosting family who visited.

Virginia always provided a “safe place to land,” whether you were family or friend. She helped when each new grandchild was born, she was ready with a van when one of her daughters was moving, and she led Girl Scout troops, among her many activities. Virginia hosted the only Commodore Computer club in Kansas City North in the late 1970s—hence she owned a home computer before any of her children.

Virginia was preceded in death by her husband, Wayne, and by her two brothers, Harold and John Barr.

She is survived by her sister, Mary Tolbert of Topeka, KS; her daughters, Jenny Lindsey (Bob) of Tampa, FL, Carole Alban of Dallas, GA, Diane McCaffrey (Dan/Pete) of Weston, MO, and Sheri Stephens of Kansas City, MO. She is loved by her six grandchildren: Jaymie, Rob, Johnny, Chad, Matt and Adam, her six great grandchildren and many nieces and nephews.

A celebration of her life and burial will be held at Terrace Park Cemetery on Saturday, April 17th at 11:00 AM.

To order memorial trees or send flowers to the family in memory of Virginia Alban, please visit our flower store.