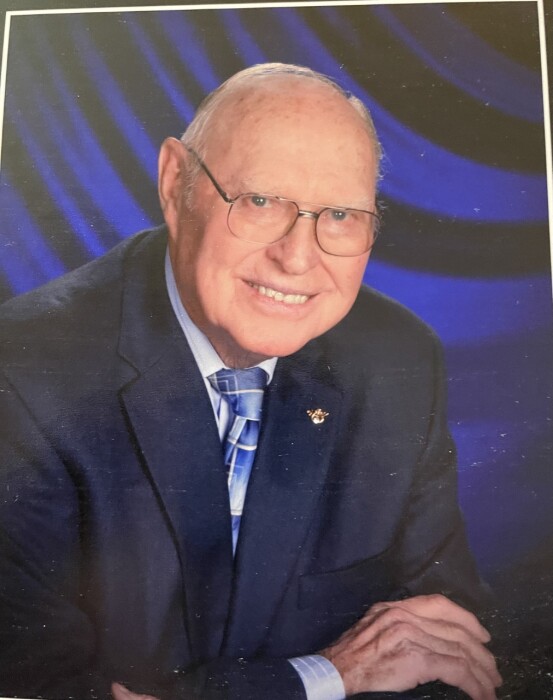 Virgle LaVern “Ernie” Taylor, 92, of Kansas City, MO passed away peacefully on July 28, 2022. Ernie was born June 22, 1930in rural Harrison County, MO; the fourth of seven children born to Virgle and Daisy (Chaney) Taylor. After graduating from Washington rural High School in 1947, he followed the summer wheat harvest through Oklahoma, Kansas, Colorado, Nebraskaand South Dakota. He served in the United States Air Force, stationed at five different bases and ending his tour of duty in Narsarsuaq, Greenland, honorably discharged in 1952.

Shortly after leaving the service, he met Bonnie Smith, his wife of 68 years. They were married March 14, 1954 and were blessed with three children: Dianne, Donnie, and Deena. Ernie worked for Frisco Railroad followed by Wayne Towel for 10 years. He joined Belmont Floor Covering in 1964 starting at the bottom and eventually purchasing and running the company until retirement 34 years later.

In retirement he had time to become more active in the Shrine. He drove the bus from Kansas City to St. Louis transporting children to the Shriner hospital. He set up health fairs for the Shrine and enjoyed entertaining the children in his bear costume during the Shrine circus. He was an avid volunteer at his church, Fairview Christian Church.

The family was thrilled to welcome Ernie’s newest great grandson Jackson, born to Tara and Stephen Formann, coming into this world on the day that Ernie left for his new home in Heaven.

We will celebrate Ernie’s life on Monday, August 1st with visitation beginning at 11am followed by Masonic, Shrine, and Military honors at 1pm. at Terrace Park North, 801 NW 108th St., Kansas City, MO  64155.

In Lieu of flowers, contributions can be made to Ararat Shrine Hospital Transportation Fund.

To order memorial trees or send flowers to the family in memory of Virgle "Ernie" Taylor, please visit our flower store.