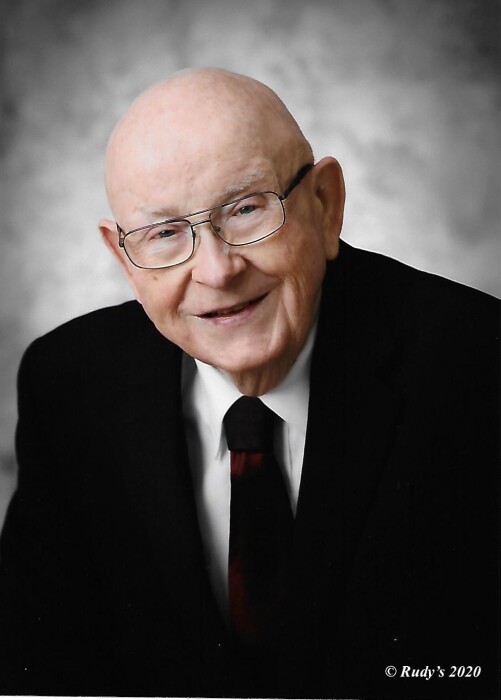 Wendell Doyle’s life can be categorized into three areas: service through his chosen profession, a life of faith and his family.

Wendell E Doyle was born July 8, 1940 in Higbee, MO to Travis E. and Hattie Erma (Webb). He graduated from Milan High School in 1958. Wendell then went to Northeast Missouri State University (Truman State University) where he earned his Bachelor of Science in Music Education. It was also there that he met the love of his life, Judy (Julia Ann Vail). He began his teaching career as a vocal music director in Braymer, MO. The following year the attraction of a pay increase to support his new wife launched him into the world of instrumental music where he continued for the remainder of his career. He continued teaching in Braymer for a total of 6 years while also earning his Master’s in Education from the University of Missouri-Columbia. His next career move was to Brookfield, MO for four years. In 1972, Wendell and his family of five made the move to Kansas City so he could teach in Platte City, MO.

During his tenure at Platte County R-III, he led a successful band program for middle school beginners to seniors. As part of restructuring the band program, he organized the school’s first jazz band and brought in a second director. He was thrilled to work alongside Harlan Moore, Penny Sneed and Susan Shier. He saw many students recognized for their musical abilities by being selected to honor bands including the McDonald’s All-American Band, the  Missouri Lion’s Club Band, and District and All-State Bands. His bands consistently earned I or II ratings at the yearly District Music Festival where students also earned top marks in solo and ensemble performances. The high school concert bands had the honor of performing at the Missouri State Teachers Association Convention and the Missouri Music Educators Convention. The students also showcased their talents in Silver Dollar City, the Capitol Rotunda in Jefferson City, and at President George H. Bush’s arrival at the Kansas City Downtown Airport. A yearly highlight was working alongside Marty Pope and Mark Cutler to direct the pit band for the high school’s spring musicals. After his retirement in 1992, he started working as an adjudicator. He said he enjoyed being in the sight-reading room because he was able to interact with the students.

Wendell was honored to represent Platte County in a Teacher Exchange with the Warwickshire School District in Warwickshire England even though it meant missing the end of the football (marching) season. When he returned, he wanted everyone to know all he learned about music education in England.

Wendell cherished his association with other band directors and teachers which continued beyond retirement. He served as the Missouri Bandmasters Association’s Secretary/Treasurer for 20 years, Phi Beta Mu National Bandmasters Fraternity - Lambda Chapter’s President and the President of Clay/Platte Missouri Retired Teachers Association.

Wendell was honored to receive the Charles Emmons Outstanding Band Director of the Year Award in 1993 and inducted into the Missouri Bandmasters Association Hall of Fame in 1997.  He was recognized as the Distinguished Retiree of the Year in 2010 for Region 2 of the Missouri Retired Teachers Association and inducted into the Platte County R-III Pirate Hall of Fame in 2014.

Wendell was a gregarious man and no vacation was complete until Wendell ran into someone he knew. It didn’t matter if he was walking on a beach in Alabama or sitting in an ice cream parlor in Colorado. The friendships he made were life-long and each person held a special place in his life.

When Wendell retired from teaching, Judy insisted he get another job to keep him occupied. He chose to work at a travel agency which allowed them to travel the world. Their favorite trips included an Alaskan cruise, a Mediterranean cruise with his high school buddy, and a 50 th Wedding Anniversary trip with their kids and grandkids to Hawaii.

The most important part of Wendell’s life was his faith in Jesus Christ.  At the age of 16, he made the decision to begin living his life for Jesus. This included serving Him as Minister of Music at First Baptist Church of Higbee, Missouri.  He also served at First Baptist Church of Braymer, First Baptist Church of Brookfield, and Northgate Baptist Church in Kansas City.  Wendell knew he could not meet the challenges in life without reliance on God, so he never made a decision without seeking God first. He was faithful in praying for even the smallest concern.  In fact, in the final months of his life, he had many “meetings” with God.  He knew without any doubt he would one day spend eternity with God.  Wendell relied on Christ every day he lived knowing God provided what was best for him.

Wendell was also concerned with the faith of the people around him. Part of his getting-to-know-you routine with his therapists and nurses included ensuring they had been given the opportunity to have the same faith as his. His legacy as a Christian is fulfilled through the faith of his children and grandchildren. This surpassed all personal accomplishments in his life.

Wendell was proud of his children and their successes. He was overjoyed when each one found a spouse who complimented them and their paths in life. He was over the moon when grandchildren joined the family so he could take them to McDonald’s and Sheridan’s to share his love of ice cream.

To order memorial trees or send flowers to the family in memory of Wendell Doyle, please visit our flower store.